With Inanda Dam so close to our club it’s amazing that we don’t pay it more frequent visits. Perhaps it’s the bad rep which bass have with fly fisherman. Or perhaps it’s the rumor of crocodiles. Either way we decided to open a few peoples eye’s to the opportunities on our doorstep and organised a morning’s outing.

After our previous disaster we aimed to be at the gate at 6am, only to discover that it now opens at 5am as we had previously thought. None the less we quickly kitted up and were soon joined by a few other fisherman.

As is the norm for bass we mostly fished the surface . On my second cast I missed a small fish. A few cast later I missed another. Since they looked to be small I downsized to a small popper and immediately got into a few small bass.

Nick was also fishing the surface but he was missing a lot of fish due to the size of his flipper. I guess he was after the big boys. Ever the optimist.

Gavin on the other hand opted to fish sub surface and also picked up a few small bass, although the surface option certainly seemed to be a lot more productive.

On a whole the day was great fun. We landed in the region of 30 bass and loved every minute of it. We may not have hooked into anything big, but we had an awesome morning none the less. 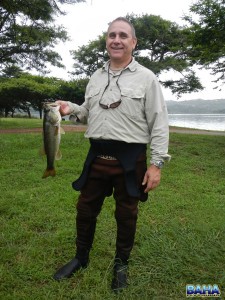 Marco With A Nice Bass

This month our resident bass expert, Marco Breschi, showed us how to tie a leech pattern to improve our success with bass. This of course led to a small outing to Inanda Dam to try out the new fly.

Things got off to a bad start when we arrived at the gate at 5am only to discover they only opened at 6am. Not deterred we spent our hour at the gate pumping up our tubes, kitting up the rods, and talking tactics. When it eventually opened we were quickly onto the water and headed off in our different directions.

I was hopeful when I picked up my first fish on just my third or fourth cast. Things then slowed down and it wasn’t as productive a day as I may have hoped. That said we all picked up several fish and our bass expert Marco got a nice fish in the region of 2kgs (and dropped a 4kg largemouth).

All in all a great way to spend a Sunday morning.